Hello Fred, Thank you for this amazing Blog.

As promised, here is my wonderful memory of GM :

It was in 2012 September the 9th at the Opera Garnier in Paris ( A BIG AND GREAT MOMENT FOR ME ) especially after his hospitalization, to see him again on stage was magical and a big relief.

This man is just a miraculous particularly after this last accident and I thank God to keep him alive for us, we still need him ;-)))

so if he could stop having near death experiences, I'll be very happy :))

Happy Birthday my FAVOURITE HOMO EVER ;-)

have a good one !

Keep on smiling, we are ALL waiting for your comeback as soon as possible please. [Haut]
Hello Frederique,
My sister and I want to congratulate George Michael with his 50th Birthday.
Our best memory: the concert of 25Live in Amsterdam Arena of 26.06.2007.
We, the whole audience, congratulated him with his Birthday (see undermentioned).
Nice to know : George's birthday is on 25.06 and mine is on 27.06, so that concert was just between our birthdays.
My favorite picture : taken in Vienna (see above). One word to describe George: distinguished
Péronne  and Monique  Moerenhout  from  The Netherlands This is my short summary of George Michael rule in my life.

Opposite to many of other fantastic fans  I’m living in a country where it was simple impossible even to dream to meet George Michael at concerts or  have access to his singles or albums  at once (when I was young).

Thanks God polish radio and TV have always loved him much, and I spent a lot of time waiting for his songs or listening to tapes

(Do you remember these good all times?)

First song – “Young Guns”, and everything started- up to now.

I passed leaving school exam – I had to describe in English my free time activity.

I started talking about music and of course the rest was about George.

The most important song “Jesus to a child” because:

The song I love – “Move on” it simply moves all my feelings.

Times changed, we are in UE and my dreams came true : first concert in Berlin (25 live), and among others concerts 2 in Poland – for me incredible, and meeting face to face with George himself in front of the hotel in Prague.

Unfortunately the concert was cancelled I was alone in a hotel completely broke down.

In an hour later I met wonderful people who took me to their car, we went at the hotel and we were waiting for George. I was very close to him and I would never forget his voice (magical).  My first thought was that he was much handsome in real life than in videos, at concerts (if it is possible of course), and he let me feel his incredible power.

’m very strong person but in his company, despite the fact that he was absolutely fantastic and patient and nice, I felt that he was THE BOSS there.

And now – next weekend I will be giving lecture to my university students about business. In their book there is a picture of George Michael and the cover of 25live booklet (the example of success). It will be quite nice time for me. This picture was taken by one of my friends in front of the hotel in Prague. George was leaving because the concert was cancelled. We were happy to see him. One of these hands on the left side of the picture is mine.:)

I was so close to him.
Thank you George for your music and I wish you all the best from the bottom of my heart. Being your fan means that throughout  my live I have one person more to love, take care who is important for me, whose voice helps me when “the life is kicking my…… “ My most precious memory was in November 2006 in ahoy Rotterdam the moment thst George began to sing waiting because I thought that I could never see him live on stage again.

Now I know better saw him five times after that night.

Hope it will become more.

The word I can think of to discribe George Michael is said many times before and is UNIQUE.

Greatings and a lot of succes with the blog can't wait for the birthday specials. My unforgettable memory is, of course, when i met him and made this photo (13 october 2012 in London).

Was a really unbelievable sensation, I was litterally overwhelmed, I didn't realize that was effectively happening, and I wasn't able to say nothing more than thank you.

A dream became reality!
My word to describe George: Talent.

Ciao and thank you!
Giuseppe @G_d_P_ 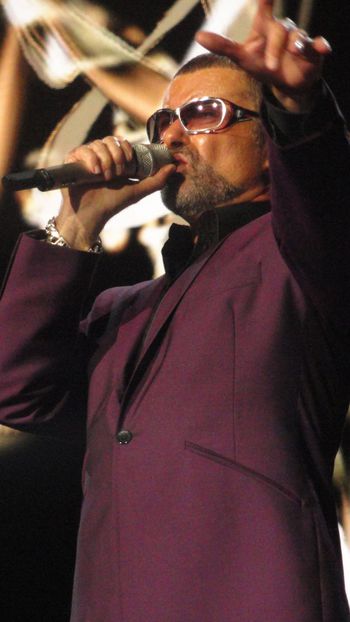 I may be one of GM’s youngest fans, but I still have one memory that stands out, and in fact I’ve been a fan of his, for about two years since that.

I started to listen to his music when I was around 13 years old (the classics of course, not the deeper songs), and I thought to myself (first of all « Wow, this guy is gorgeous!»), and then, wow, for me who kind of knows all the current singers (who all end up being the same… ) this one, who my mother has always been talking about (she used to be a fan herself) has something in his voice, because yes he actually has one compared to the computers everyone uses today.But most of all, he has an identity: he is an icon of the 80’s, a sort of living legend, which you no longer find today. And immediately for those reasons, he occurred to me as someone precious and unique, like someone we need to keep with us for a longtime, precisely because there is no one else like him in this business.

I then heard at the end of 2011 about the pneumonia, and even if I still had this kind of stereotypical vision of the young sex-symbol with the golden voice, it still left me heartbroken because as I explained, I saw like someone we absolutely need to preserve.

I am not going to describe the anxiety I felt during the following weeks (we all know what that was like…), but the feeling of relief, and the disclosure I had after watching the famous video where George announces, right after leaving the hospital, with an unrecognizable voice, that he’s alive. I remember the flood of tears and how I kept thinking « Thank God! He saved an idol ». I don’t remember if I had the courage to see the whole video, but I know for sure that I only saw it once, and I don’t plan on seeing it again.

Afer this, I thought to myself that I absolutley needed to learn more about this artist and that I have to be part of the people who support him, and from that my first impressions were confirmed : he is unique in his style and his voice, but he is also capable of writing very deep and timeless things, which still appeals to a younger audience like me.

Without even knowing him at first, George is someone for whom I naturally had a lot of affection and emotion, and I never really felt that for someone famous before, and that is where my big attachment for him comes from.

If I had to summarize him in one adjective, it would be « precious », because for me and by definition, he is someone of great value and who deserves an absolute care.